The rise and unexpected sweeping success of the Islamic forces in the 7th century CE prompted the need to write the Koran. The Moslem Arabs scrambled, after the sudden rise and success of their forces, to have the Koran printed. They utilized the existing Ancient Egyptian cursive style that was commonly used in northern Arabia, and tried to make an independent language out of it.

It was and is a pathetic attempt to give a form of identity to a new “religion” by awarding them with a “new” language. With the exception of a few changes in letter-forms and adding plenty of dots, it remains the Ancient Egyptian language in every and ALL regards. More analysis of letter-forms in Ancient Egypt as compared to present letter-forms can be found in Chapters 12 and 23 of this book. This twisted Arabic script survived and continues to survive only because it is the only permitted language for the Koran and prayers for the Moslems. The fate of “Arabic” is connected to the fate of Islam.

Despite such attempts, the British Egyptologist Alan Gardiner, in his book Egyptian Grammar, page 3, stated:

As for other pillars of a language such as grammar, syntax, etc., it remains exactly like the Ancient Egyptian language.

“The Egyptian language is related, not only to the Semitic tongues (Hebrew, Arabic, Aramaic, Babylonian, etc.), but also to the East African languages (Galla, Somali, etc.) and the Berber idioms of North Africa. Its connection with the latter groups, together known as the Hamitic family, is a very thorny subject, but the relationship to the Semitic tongues can be fairly accurately defined. In general structure the similarity is very great; Egyptian shares the principal peculiarity of Semitic in that its word-stems consist of combinations of consonants, as a rule three in number, which are theoretically at least unchangeable. Grammatical inflection and minor variations of meaning are contrived mainly by ring­ing the changes on the internal vowels, though affixed endings also are used for the same purpose.

The “Arabic Language” complies exactly with the all linguistic characteristics of the much older Ancient Egyptian language which was detailed in Chapter 15 of this book. Such include (but are not limited to) Ancient Egyptian prototypal interconnected lexicon, grammar, and syntax such as the significance of verbs, verb roots, verb stems,, verb classes and structures, the conjugation scheme for verbs, and Egyptian prototypal etymology/lexicons and word formation/derivations from a three-letter root (which signifies a certain general concept) into numerous patterns through the use of intermediate vowels and prefixes, infixes and suffixes, etc.; in addition to types and structures of syllables as well as syntax/word orders and sentence types.

2. Easy to write—called “Kufii”, which means “hand”, which also has nothing to do with any particular city/geographic location. It is written with angular forms.

There is no religious distinction in Islam for using uncials to write religious matters. However, some early writings were made in the uncial style.

And it should not come as a surprise that all academics agree that the oldest specimens of the two styles [Bassri and Kufi] in the “new Arabic” are two Egyptian passports of the year 700 CE and a private letter, also written in Egypt, dated in the year 670 CE.

To say that Egyptians speak and write “Arabic” is totally false and illogical. It is the other way around—the “Arabs” have long ago “adopted” and continue to speak and write EGYPTIAN. 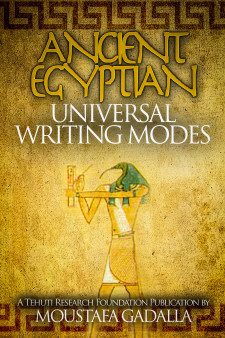