Before we proceed with more information about the Ancient Egyptian knowledge, we should review some simple terms and fundamentals in our modern-day nomenclature.

• Consider a string of a given length as unity. Set it vibrating; it produces a sound—shown here as Do.

• Stop the string at its midpoint and set half of it vibrating. The frequency of vibrations produced is double that given by the whole string, and the tone is raised by one octave [shown herein as Do1].

• Between the original note (produced from the whole length—Do) and the sound produced at the halfpoint (its octave, Do1) there are six positions where the ear interprets six different harmonious sounds (Re, Mi, Fa, Sol, La, Si) located at unequal distances from each other. The reaction to all the sounds of natural tones is characterized by an unmistakable sense of equilibrium.

The interval between each of these tones is as follows (using Do (C) as a starting point):

The distinction between a whole tone and semitone can easily be recognized on a keyboard. The interval between Do (C) and Re (D) has a black key between them and is therefore that of a whole tone, but between Mi (E) and Fa (F) and Si (B) and Do (C) where the black key is missing, the interval is only that of a semitone.

The diatonic scale (A, B, C, D, E, F, G) can begin from any natural sound, say C, until it reaches its octave at C1 (in a rising series—ascending), or to C1 (in a lowering series—descending).

Therefore, there are seven types of diatonic scales, in each direction—up and down. Each scale is referred to by its first tone, such as C-scale, D-scale, etc. Some examples are shown below.

The present silent majority of the Egyptian people (Baladi) correlate specific activities of their daily life to certain days of the week. These activities are concentrated in two focal periods: the Eve of Monday (Sunday night) and the Eve of Friday (Thursday night), with more focus on the Eve of Friday (this has absolutely nothing to do with Islam, whatsoever). Marriage ceremonies are only allowed on these two nights, with preference to Friday Eve. Thousands of local shrines (nothing related to Islam) are visited on both these eves, with special preference to Friday Eve. People spend the night of Friday Eve at the tombs of their departed relatives (contrary to Islam). Intercourse between married couples is very special on Friday Eve. Courtship activities of all kinds are more prevalent on Friday Eve. All types of activities (cutting hair, butcher work, etc.) follow the same pattern.

Since Ancient Egyptian times, the week started on a high (musical) note, namely Saturday. [Equating Saturday to Saturn, the highest, will be clarified at the end of this chapter.] As such, the layout of the week, with the two special focal eves, look as follows:

The concentrated activities towards both ends of the week (with two centers of activity—one more prominent than the other) correspond to an elliptical form that conforms to Kepler’s first planetary law.

Johannes Kepler (1571-1630) rediscovered—from Egyptian sources—that the orbit of a planet/comet about its    sun is an egg-shaped path (ellipse). Each planetary system is balanced only when the planet’s orbit is an egg-shaped plane that has two foci, with its sun’s center of mass at one of its foci. Similarly, Egyptian traditions follow the same pattern. All aspects of their thinking and society can be reasoned by the egg-shaped characteristics—including music.

The most popular sequence of the diatonic scale throughout Egyptian history (ancient and present) is the brightest scale, namely the D-scale, which goes:

Because of the presence of two half-intervals in the diatonic scale between E–F and B–C, the D-scale is the only symmetrical scale in both directions—either ascending or descending.

By applying the sequence of the seven natural sounds of the D-scale to the seven days of the week, we get:

One cannot help but notice the symmetry of the weekdays that is also shaped like an ellipse with two focal points at Sunday–Monday and Thursday–Friday. This scale is identical to the Egyptians’ traditions of weekly polar activities, as stated earlier.

The ascending D-scale is the model for one’s deliberate communications with higher realms. In an ascending D-scale, the first ‘interval’ (semitone) comes between E (Mi) and F (Fa). Not too much energy is required at this juncture, and the octave develops smoothly to B (Si). However, the second semitone between B (Si) and C (Do) needs much stronger energy for its required development than between E (Mi) and F (Fa), because the vibrations of the octave at this point are of a considerably higher pitch. These are the reasons for the light Egyptian activities at Sunday–Monday and the greater activities at Thursday–Friday.

The descending D-scale represents the communications between the higher realms and our earthly realm. Taken in the downward direction, a descending octave develops much more easily than an ascending octave. Supernatural forces require less effort to communicate with us on earth. The first semitone occurs right away, between C (Do) and B (Si). Not much energy is required at this juncture, where the energy needed is often found either in the C (Do) itself or in the lateral vibrations evoked by C (Do). The octave develops smoothly to F (Fa). The second semitone F–E (Fa-Mi) requires a considerably less strong shock than the first.

The most favored scale in Egypt is called Bayati. It is a D-scale and thus provides the perfect harmonious communication between the above and the below—to and from.

The D-scale was known in ancient Greece as the Dorian scale/mode. We will find later that Dor-ian is an Egyptian term that was and continues to be used in Egypt.

Plato, Aristotle, Plutarch, and other Greek notables were writing in their time about the poor status of music in their country. They always made reference to an older and more superior system of music in the Greek Isles. This older system was based on the Dorian musical system. Old Greek texts on music always use Dor-ian as an adjective: Dorian mode, Dorian scale, etc.

Herodotus (500 BCE), the Greek father of history, stated that he came from Halicarnassus, a Dor-ian town. He clearly stated the connection between the Dorians and Egypt in The Histories [Book Six, Sections 53-55]:

[53] . . . if one were to trace back, generation by generation, the lineage of Danaë the daughter of Acrisius, the chiefs of the Dorians would turn out to be true-born Egyptians.

[55] Enough has been said about all this. Others have explained how and through what achievements they became kings over the Dorians, despite being Egyptians, and so I will not go into that. I will record things that others have not picked up.

Herodotus, in [55] above, stated that such a fact was common knowledge at his time (500 BCE) and needed no elaboration.

Other similarities between the Dor-ians and Egyptians were made reference to, several times by Herodotus, such as in The Histories [Book Two, Section 91].

The Egyptian Dorian influence extended throughout the Mediterranean basin. At Tarentum in southern Italy, the celebrated Pythagorean center was established by Pythagoras and his followers after he spent 20 years studying in Egypt in the 5th century BCE. The center became their great cultural and philosophical headquarters.

On the subject of music, this Doric/Dorian region in southern Italy provided notables such as:

Their writings show extensive use of the Ancient Egyptian system that was handed down to them by Pythagoras. But because of a loss of principle, their writings are fragmented, erroneous, and confusing. 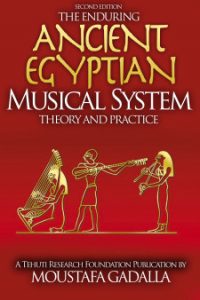