The Function/Objective of The Temple

It is the common tendency to ignore the religious function of Ancient Egyptian temples. Instead, they are viewed as merely an art gallery and/or an interplay of forms against a vague historical presentation.

In reality, the Egyptian temple was the link – the proportional mean – between the macrocosms (world) and microcosms (man). It was a stage on which meetings were enacted between the neteru (gods/goddesses) and the king, as a representative of the people. We must try to see it as the relationship between form and function.

The Egyptian temple was a machine for generating and maintaining divine energy for the benefit of one and all. It was the place in which the cosmic energy of the neteru (gods/goddesses) came to dwell and radiate their energies to the land and people.

As described in various Ancient Egyptian texts, the temple or pylon is:

…as the pillars of heaven, [a temple] like the heavens, abiding upon their four pillars … shining like the horizon of heaven … a place of residence for the lord of neteru…

The harmonious power of the temple plans, the images engraved on the walls, and the forms of worship all led to the same goal; a goal that was spiritual (as it involved setting superhuman forces in motion) and practical  (in that the final awaited result was the maintenance of the country’s prosperity).

It is therefore that the Egyptian temple was not a place of public worship in our “modern” understanding. These truly divine places were accessible only to the priesthood, who could enter the inner sanctuaries where the sacred rites and ceremonies were performed. In some instances, only the King himself or his authorized substitute had permission to enter.

The general public participated in the many great festivals and celebrations held outside the temples in honor of various deities. Public participation was a duty for everyone, and an essential aspect in the “worship” process to maintain the universal harmony. [For more info, see Egyptian Mystics: Seekers of the Way, by Moustafa Gadalla.]

In general, the Egyptian temple was surrounded by a massive wall of mud-brick. This wall isolated the temple from its surroundings, which symbolically represented the forces of chaos. Metaphorically, the mud resulted from the union of heaven and Earth. The brick wall was therefore typically set in wavy courses to symbolize the primeval waters, representing the first stage of creation.

The exterior walls of the temple resembled a fortress, so as to defend it against all forms of evil. The temple was entered through two pylons; beyond which lay an open court. This court sometimes had colonnades along the sides and an altar in the middle. Next, along the temple axis, came the hypo-style; a pillared hall often surrounded by small rooms that were used for the storage of temple equipment and for other secondary functions. Finally there was the sanctuary, which was a dark room containing the shrine where the figure of the neter was placed. The sanctuary’s doors were shut and sealed all year long, and were open only for the great festivals. The sanctuary was called the Great Seat. Outside the walls of the temple were the residences of the priestly staff and the workshops, storerooms, and other ancillary structures. 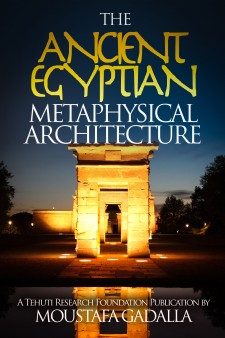 Book Purchase Outlets:
A – Printed paperbacks are available from Amazon.