As the model for cosmic nourishment of all kinds, Hathor is associated with several related functions. We will briefly mention a few such applications:

One of Isis’ manifestations is Hathor/ Astarte—like other Egyptian deities, she is also commonly known as Asera/Serah/Sarah, which means a noble lady.

To leave no doubt of her Egyptian origin, Aserah is always portrayed in her Egyptian form, with a crescent-and-disk on her headdress.

Hathor, as the symbol of spiritual nourishment, also plays an important role in the transformational (funerary) texts, furnishing the spiritual nourishment/guidance required by the soul of the deceased as it travels across the cosmic sea. Consequently, Hathor/Aserah is the Egyptian travel and sailing patroness; and, as a result, she appears in this role more often outside Egypt.

Hathor’s head is therefore always depicted right above the stern of ships where the twin rudders (which expert pilots used to guide the vessel) were mounted.

To leave no doubt of her Egyptian origin, Astarte is always portrayed in her Egyptian form with a crescent-and-disk on her headdress.

In another fragment, Renenutet addresses Astarte:

Behold, if thou bringest him tribute, he will be gracious unto
thee. . .Therefore give him his tribute in silver, gold, lapis
lazuli, and. . . wood.
And she said unto the Ennead of gods:
. . . the tribute of the sea; may he hearken unto us. . .

During (and subsequent to) the turbulent times of the Reconquest, many people fled from the Iberian Peninsula to North Africa, Egypt, and France. The most prominent festival in southern France is held by the (Egyptian) Romany at the seaside by the Mediterranean Sea, towards the end of spring. The pilgrimage destination is the Church of Notre Dame de La Mer.

This Romany pilgrimage to the site of this church is the oldest in France.

The “historical” tradition associated with this Romany festival had a solid connection to Egypt. According to tradition, a dark-skinned Egyptian maiden called St. Sarah arrived in a tiny boat without oars or sail, together with two white-skinned maidens whose names are Mary Salome and Mary Jacobe. Their boat is said to have landed on this part of the Mediterranean coast, having drifted across the Mediterranean Sea, about 42 CE.

The “name” of the center stage character of this festival is also significant. Her name—Sarah—is an Ancient Egyptian word that is the feminine form of Sar which equals a person of high/noble status. Sarah therefore means the Noble Lady, in the Ancient Egyptian language. In Ancient Egyptian traditions, Saint Sarah is Hathor —Patroness of Travelers by Water. Her name, Sarah, is consistent with her being Our Holy Mother of the Sea, as stated above.

Similar accounts of an ark drifting to the shores of the Iberian Peninsula are found in many places. Such accounts are found, among other places, at Elche, Spain and Santiago de Compostela.

It is no accident that the theme of a (woman) saint and her two guardian angels (Mary Salome and Mary Jacobe) that we find in southern France is also found at Elche and numerous places where these dark/tanned skin people—the descendants of the Egyptian Pharaohs—are to be found.

The “Two Marys” are the Twin Sisters Isis and Nephthys—the two accompanying guiding angels described earlier in this book.

[An excerpt from Isis The Divine Female by Moustafa Gadalla]

[An excerpt from Egyptian Romany : The Essence of Hispania by Moustafa Gadalla] 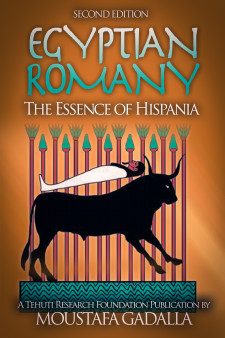