The Egyptian allegory of Isis and Osiris explains practically all facets of life. This love story resonates with betrayal and loyalty, death and rebirth, forgetting and remembering, evil and righteousness, duty and compassion, the manifestation of the forces of nature, the meaning of sisterhood and brotherhood and of motherhood/fatherhood/son-hood, and the mysteries of the body, the soul, and the spirit.

The following is a shortened version of the Isis and Osiris Egyptian allegory, provided so as to highlight the Egyptian source of Christianity. This narrative is compiled from Ancient Egyptian temples, tombs, and papyri, dated 3,000 years before Christianity, and goes as follows:

The self-created Atum begat the twins Shu and Tef-nut, who in turn gave birth to Nut (the sky/spirit) and Geb (the earth/matter). [More details about the creation of the universe and man are in a later chapter.]

Like the biblical Jesus, Osiris symbolizes the divine in a mortal form combining both spirit (Nut) and matter (Geb).

According to the Ancient Egyptian traditions, Osiris came to earth for the benefit of mankind, bearing the title of Manifester of Good and Truth – likewise, the biblical Jesus.

Osiris brought civilization and spirituality to the people, enabling them thus, to achieve prosperity. He gave them a body of laws to regulate their conduct, settled their disputes justly, and instructed them in the science of spiritual development.

Having civilized Egypt, he traveled around the world to spread the same instructions. Wherever Osiris went he brought peace and learning to the people:

Between the two evangelists (Osiris and Jesus), there are vivid similarities. The divine son comes down from heaven. God came down to earth to guide the world. Both had traveled to spread the word.

Osiris induced people to accept his teachings not by force of arms, but by the use of persuasive lectures, spiritual hymns, and music. Diodorus of Sicily wrote, in Book I [18, 4]:

Osiris was laughter-loving and fond of music and the dance; Similarly, the biblical Jesus was persuasive and was celebrated as Lord of the Dance in a Christmas carol from the Middle Ages.

When Osiris returned from his mission, he was greeted with a royal feast where he was tricked by Seth—the evil one—and his accomplices into lying down inside a makeshift coffin. The evil group quickly closed and sealed the chest and threw it into the Nile. Seth became the new Pharaoh as the coffin containing the lifeless body of Osris flowed into the Mediterranean Sea.

Both Jesus and Osiris were betrayed by dinner guests (Jesus by Judas, and Osiris by Seth at their own privately-held banquets. The biblical Jesus’ age was assumed to be 23 years old and Osiris was 28 years old—both were young.

Meanwhile, Isis, upon receiving the news of Osiris’ fate and disappearance, was in grief and vowed never to rest until she found the Manifester of Truth—Osiris.

Isis searched everywhere, accosting everyone she met, including children: for it was said that children had/have the power of divination.

Children, with the power of divination, are acknowledged by the biblical Jesus in the New Testament.

The story goes that one day during her search, Isis requested shelter at the house of a poor woman.

This point signifies the paramount feature of the Egyptian teachings where one was/is taught not to consider oneself to be superior to others, but to rank oneself as the poorest, lowest, and most humble of mankind. This applies to everyone—including Isis, the Queen.

By fabricating humble roots for Jesus and his family, Christiandom missed the point that it is the powerful who must learn to be humble.

Humility is symbolized in the action of the Christ King mounting an ass: that represents the ego and false pride. This is truly Ancient Egyptian symbolism.

The story continues that the coffin of Osiris was swept by the waves to the shoreline of a foreign land. A tree sprang up and grew around it, enclosing the body of Osiris in its trunk. The tree grew large, beautiful, and fragrant. [See the Ancient Egyptian temple depiction below.] News of this magnificent tree came to the king of this alien land, who ordered that the tree be cut down and its trunk brought to him. He utilized the trunk as a pillar in his house without knowing the great secret it contained within.

In Christianity, this became the Christmas tree.

Isis had a revelation in her dreams that Osiris’ body was in this alien land, so she immediately traveled there. When she arrived she dressed as a commoner and befriended the queen’s handmaidens and was able to get a job in the palace as a nurse of the baby prince.

Isis, the Queen of Egypt, practiced the Egyptian teachings that emphasize the practice of humility by serving others without exception to achieve union with her love—The Divine.

Later on, Isis confessed her identity to the queen, as well as the purpose of her mission. Isis then asked the king that the pillar be given to her. The king granted her request, and she cut deep into the trunk and took out the chest.

Isis returned back to Egypt with the chest containing Osiris’ lifeless body. She hid the body in the marshes of the Nile Delta. Isis used her magical powers [according to Pyramid Texts number 632, 1636, and murals at Abydos and Philae] to transform herself into a dove. Drawing Osiris’ essence from him, she conceived a child—Horus. In other words, Isis was impregnated by the holy ghost of Osiris. [See the Ancient Egyptian temple depiction below.]

>This action symbolizes reincarnation and spiritual rebirth—a key to understanding the Egyptian belief in life after death.

Shown above is an Ancient Egyptian temple depiction showing Isis on the left, as her magical essence embodied in the flying dove draws the essence of Osiris to be impregnated. On the left, a frog-headed netert (goddess), Heqet, symbolizes the power of fertility, representing conception and procreation.

>Isis’ conception of Horus by no living man is the oldest documented version of immaculate conception. The supernatural conception and the virgin birth of Horus found their way into Christianity.

Isis’ role in the Egyptian Model Story and the story of the Virgin Mary are strikingly similar: for both were able to conceive without male impregnation, and, as such, Isis was revered as the Virgin Mother.

– More about the Ancient Egyptian concept of holy (virgin) conception/birth is found earlier in this book.

– More about the ideal of virginity in the Ancient Egyptian culture is found earlier in this book.

When Seth heard about the new child (Horus), Seth went to kill the newborn. Hearing that Seth was coming, Isis was told to take him to a secluded spot in the marshes of the Nile Delta [as per the Ancient Egyptian temple depiction shown below].

This is the source of the story in which Herod, upon hearing about the birth of the biblical Jesus, set out to destroy all the newborn males. In the New Testament the angel of the Lord says to Joseph: “Arise and take the young child and his mother and flee into Egypt.”

Like Isis, the Virgin Mary is celebrated as the “Queen of Marshes”.

An Ancient Egyptian festival celebrating the birth of Horus, was held on 25 December, and it resembles the Christian festival of Christmas. The celebration was called The Day of the Child in His Cradle, and was held at the court and the chapel of the Dendera Temple. [More information in a later chapter.]

The story continues that one night (while Isis was giving birth to Horus in hiding), when the moon was full, the evil Seth and his accomplices found the chest containing the dead body of Osiris and cut him into 14 pieces (the number 14 symbolizes the number of days required to shape a full moon). Osiris represents the lunar principle in the universe and is known as Osiris the Moon.

When Isis heard about how Seth and his accomplices cut Osiris into different pieces and scattered them throughout the land, her job was to search near and far, to collect and put the broken pieces back together.

1. To bind or tie together is the meaning of the “Latin” word religio, which is the root of the word ‘religion’.

2. By remembering and recollecting the story of Isis and Osiris, we keep in our hearts a tale that expresses, in Joseph Campbell’s words, “the immanence of divinity in the phenomenal forms of the universe.”

As soon as Horus had grown to manhood, he challenged Seth for the right to the throne in what was called the “Great Quarrel/Struggle in the Wilderness.”

Thoth, Isis, and Horus performed the Ceremony of Opening The Mouth upon the mummy, and Osiris was brought back to life as the Judge and King of the Dead (the past), while Horus was to take his place as king of the living (the present). Seth remained the Lord of Wilderness.

This represents the everlasting perpetual cycle of the spiritual power on earth: The King is dead: (Osiris); Long live the King (Horus).

As the Perfect Shepherd, Osiris is usually shown in a mummified, bearded human body, carrying the shepherd’s crook (being the shepherd of mankind) and the flail (symbolizing the ability to separate wheat from chaff).

The shepherd motif is encountered in the 23rd Psalm; “thy rod and thy staff, they comfort me”.

In many ways, the account of the Resurrection of Jesus is similar to that of Osiris. Like Osiris, he is said to have risen from the dead. The Ancient Egyptians believed, as did the early Christians (Hebrews, 4:14), that “man cannot be saved” by a distant Almighty, but only by one who has shared the experience of human suffering and death.

– Both Osiris and Jesus suffered and died.

– Both Osiris and Jesus were shortly resurrected after their deaths. Reassuming earthly form, they demonstratively affirmed proper conduct and its other-worldly rewards, after which time they returned to heaven, having “saved the world”.

– Both became the savior to whom men and women turned for assurance of immortality.

Finally, the biblical story about the raising from the dead of El-Asar or Lazarus has maintained the Ancient Egyptian name/concept of Osiris whose name in the Ancient Egyptian tongue was ‘Asar‘. The miracle described in John’s Gospel was never an historic event. Instead it was a recurring, deeply archetypal and widely used symbol of God’s power to resurrect the dead. 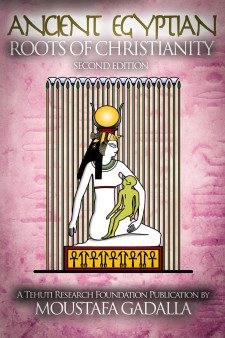